New York day 4 was our last day in this wonderful city. You can read what I got up to on Day 1, Day 2 and Day 3 by clicking on the links.

Day 4 was the first day that I actually started to feel settled. I started to feel like I knew where places were, what the difference between streets and avenues were and how to get to where I needed to be without spending hours waiting at stop lights.

As we had seen the majority of the tourist attractions in the first three days, on day four we could explore and take in the sights, sounds and atmosphere of the city without rushing to somewhere we needed to be. So in the morning we decided to explore Mid-Town and the are surrounding our hotel. 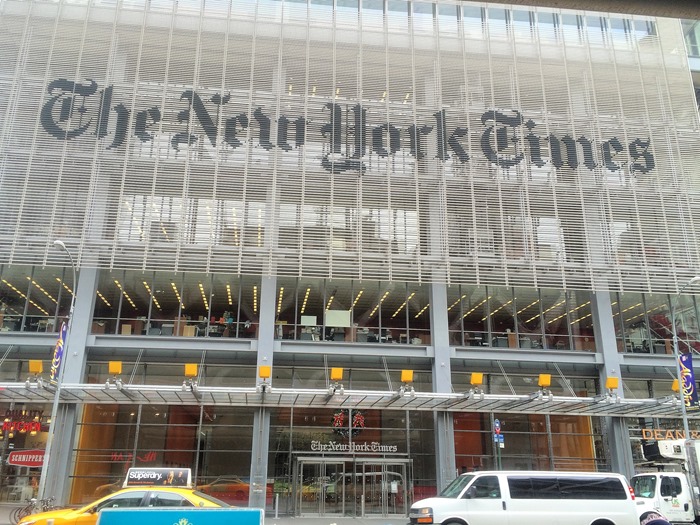 Our hotel was just behind the Port Authority Bus Station which is directly opposite the very impressive New York Times offices. 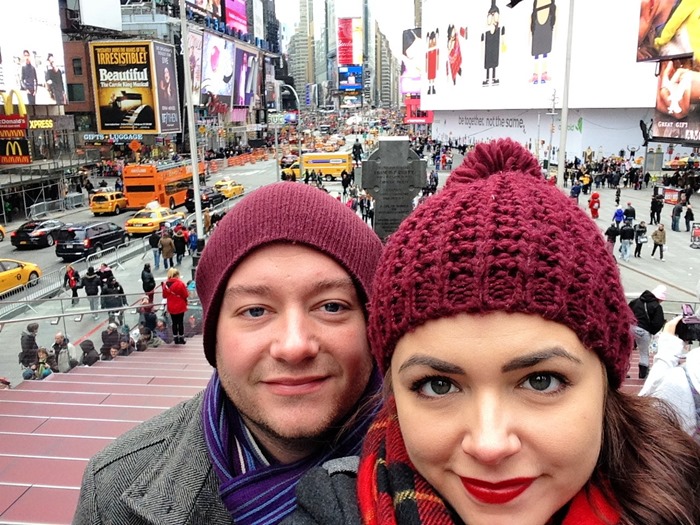 We headed to Times Square which is just a few streets away. Thankfully it wasn’t as busy as we’d seen it previously that week which gave us chance to take a few pictures on the famous red steps! The square itself is a sight to been seen with all the advertisement, Broadway shows, ticket sellers, tourists and people dressed up like Mickey Mouse and Elmo but it’s not the real New York. It is a tourist attraction but I’m pleased to tick it off my list!

After wandering around Mid-Town we headed back up to the Rockefeller Centre to take a view of the city from above! 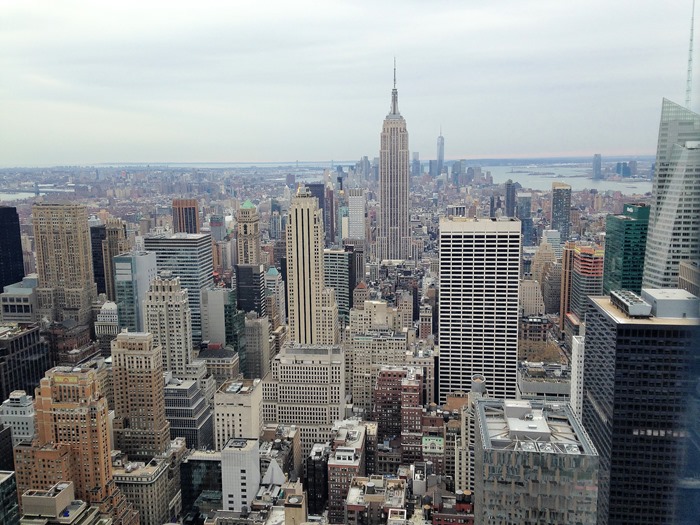 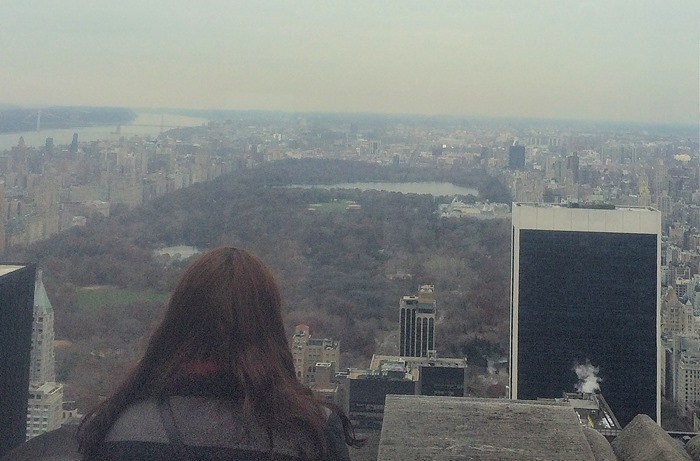 Thankfully it was a clear day – not blue sky clear, but clear enough to take the view. It even snowed when we were up there!

The view was everything I’d hoped it would be! The Rockefeller Centre is perfectly placed to offer a view over Central Park to the north and the Empire State Building, Mid-town and beyond to the South. The queues to get to the top weren’t too bad and once you get to the top there is lots of room to take in the view. We were able to stay up here so an hour of so taking lots of photos of the view and group selfies.

After taking in the views we headed north to see if we could get a table at the notorious Serendipity – yes the one form the film with the famous Hot Chocolates. Unfortunately by the time we’d got there there was a wait of 2.5 hours for a table, so we decided to skip the wait and headed to a little Pizzeria just down the road called Patsy’s Pizzeria. It didn’t look impressive from the outside, however once we stepped inside we saw the place was full and the food looked amazing!

We all ordered a pizzas to share which we’re pleased we did! You can see from above just how large they are! They were big in size and big in flavour and I’d definitely recommend the place! There are four of them dotted around New York. After Pizza we headed back to the hotel to sadly pack our bags ready to leave the hotel – The Marriot Fairfield Inns and Suites, for the airport.

The trip to JFK from the city is very simple and doesn’t take too much time – which meant we could soak up every last New York minute we could!

I had the most amazing first trip to New York and plan to go back as soon as possible. I would love to visit in December when the snow comes and the Rockefeller Christmas Tree lights are switched on! I think 4-5 days is the perfect amount of time for a first visit to New York. It allowed me to see all the sights I wanted to see, gain a good feel for the city and have an idea on where things are and how to navigate the city. The next time I visit I can chill a little more, enjoy exploring a little more and live a little less like a tourist.

Looking back at this trip and all the other places I visited in 2014 I was very lucky! A City Stay in Madrid, a German Adventure, a Summer on the South Coast of France and Monaco, a Staycation in Cirencester and Thanksgiving in New York. I don’t have anything yet booked for 2015 – but I’m aiming to make it just as exciting!

Have you ever visited New York? How long did you visit for? Would you go again?