Barbeque Sauce and Aerosmith – what more could you ask for!

My trip to Red’s True BBQ in Manchester this past weekend was not my first visit, in fact I have attempted to get a table at this infamous restaurant twice before, however both times proved to be unsuccessful. There are two well known things about Red’s True BBQ – 1- their food is immense, 2- tables are in high demand! Much like any hyped restaurant pre-booking is not available, so the trick is to head into town early, put your name down for a table and then wait at a bar nearby with a drink in hand.

Matt and I decided to jump on the train and arrived at Red’s front door at around six on Saturday evening. The first thing you are greeted with upon entering the grand looking front door is a queue, a friendly host and a busy interior filled with tables, benches, a large open kitchen and cages everywhere. Before we could venture any further into the restaurant we were told that the next available table would be at 7.15pm, so we put our names down and headed to the Slug and Lettuce next door for drinks while we waited. 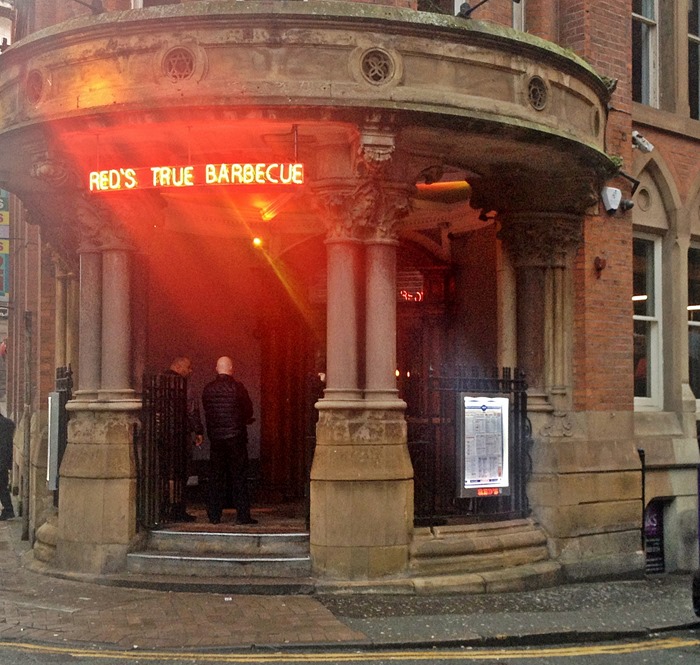 Come 7.15pm we headed back to Red’s eager to get our hands on a menu so we could salivate over what we were going to eat. Once sat at our table we were able to see across one side of the restaurant and bar. The interior is unlike any other I’ve seen. Walls are made from wire gates and cages, seats and benches made from crates and there’s a wide range of neon illuminated signs all with religious association. There’s a fantastic classic rock playlist played loud but not so loud you can’t talk over it – my highlight was Aerosmith Love In an Elevator. There is a religious theme that runs throughout the restaurant and menu with lots of amen here there and everywhere – this all adds to the feeling that you’ve stumbled into a burger joint somewhere in the southern states of the USA. The only thing missing is the bikers and Hill Billies towing their pet alligator!

Upon opening the menu you’re met with a wide range of burgers, ribs, sandwiches, steaks and tempting sides. Matt and I have dined in the Red True BBQ in Leeds so are no stranger to the tempting menu, however it still took us a while to make our decision. We’ve learnt from past mistakes and decided to go for one main course and skip the starters. Our waiter came across answered questions we had about the menu and even brought us a taster of the Grits as I had no idea what they were. He was incredibly friendly and a star all evening.

Anywhere that welcomes bloggers and food photo fans is a winner for me! It was nice to know my obsession of taking photos of my food was welcome here!

Anyways Matt and I missed a trick and ordered wine and beer. However we’ve since found out that Reds is famous for its crafts beers and ales, cocktails, shakes and floats. So we’ll be indulging in this on our next trip and I would recommend you to do the same!

Our food arrived very quickly despite the restaurant being full- which is always a good thing! This visit I chose the Pulled Meat Nachos which were pilled high with succulent pulled pork, pulled chicken, jalapenos, their house made chilli con queso, guacamole, sour cream and Unholy BBQ sauce.

My nachos were messy and delicious! Although a lot of toppings they worked perfectly – the barbequed meat and sweet BBQ sauce was complimented well by the spicy jalapenos and cooling sour cream and guacamole. The tortilla chips kept their shape well and refused to crumble and wilt no matter how much topping I scooped on them! There was more than enough to satisfy my hunger, however I had to try the onion rings!   The onions rings were giant in size and giant in flavour. The batter was quite sweet, light and crispy. 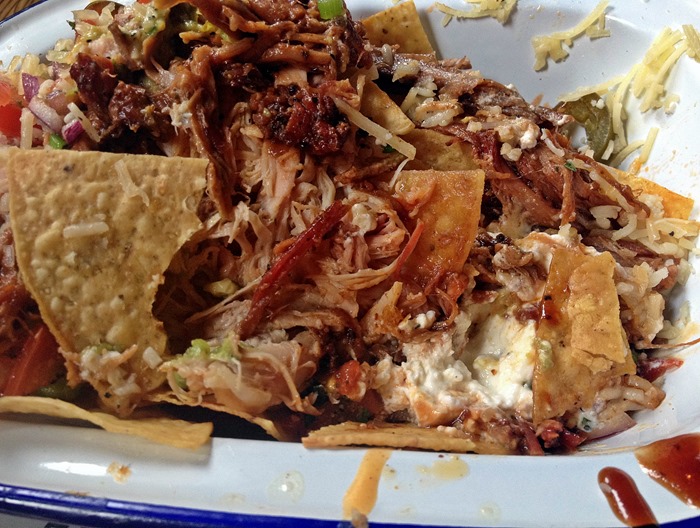 Matt’s burger was pilled high with toppings and would have been even better had he not of held the Dirty Sauce! So instead he overdosed on the wide selection of BBQ sauces you get on your table. The burger was cooked well – not overdone and still a little pink in the middle – juicy and tender. The brisket and pulled pork turned a simple burger into an epic burger that was quickly demolished with the skin on fries. 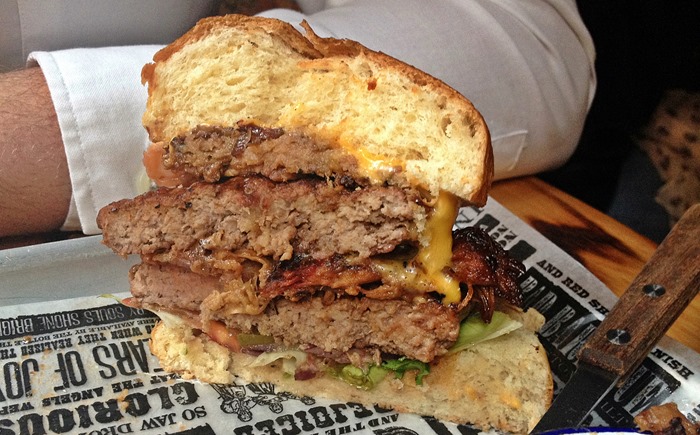 After finishing every last bite, Matt and I sat back and kindly refused dessert even though the  Chocolate Peanut Butter Cheesecake was whispering my name – next time! Next time! 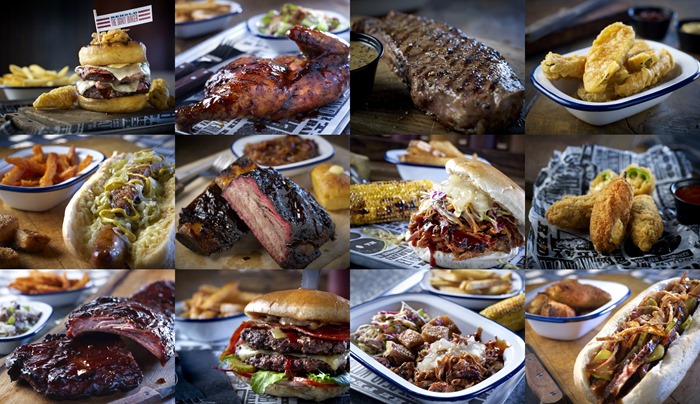 So if you’re having a cheat day, have a craving for meat, or just love BBQ sauce Red’s True BBQ in Manchester is the place to be! A great new concept that is proving to be very popular in both Leeds and Manchester. 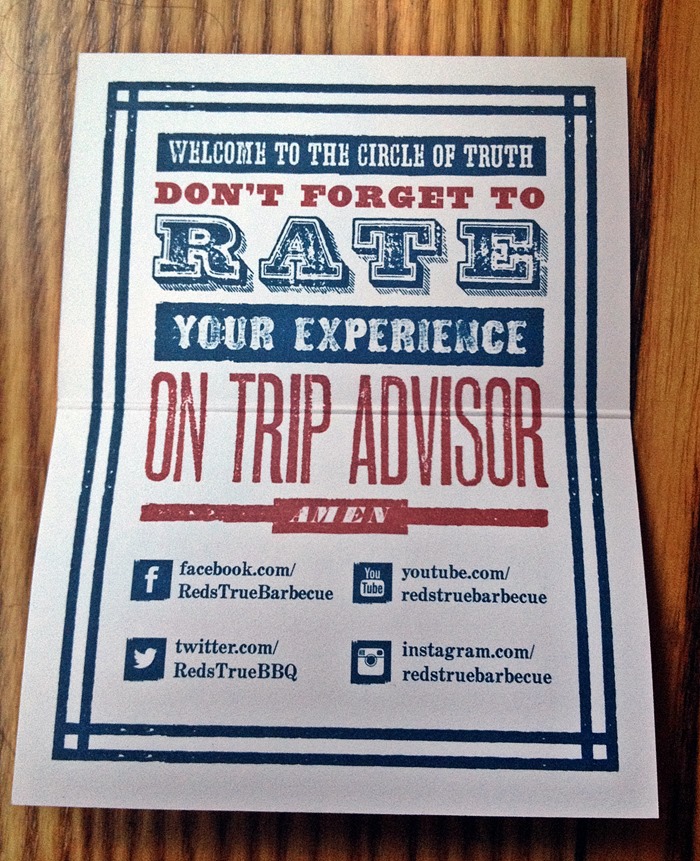 Have you ever dined at Red’s Trust BBQ? What did you think of it? Would you be tempted to give it a go?